Jump to content Jump to navigation Jump to startpage

/Magazine/Find the right frame for the right picture

To find the right picture frame for your picture is not always simple. There are many aspects to take into account, and many details to think about. But don't let it stress you out – to choose a picture frame should be fun. To make it a little easier for you, we have compiled a list of things you ought to consider.

The first thing you should do is measure your picture. The measurements do not need to be right down to the millimetre, because all picture frames are several millimetres bigger than the given size. An accuracy of +/- 2-3 mm will do just fine.

It is useful to know that all picture frame sizes are given according to the size of the picture they can fit, rather than the outer measurements. A picture frame with the measurements of 18x24 cm fits, in other words, a picture which is 18x24 cm. 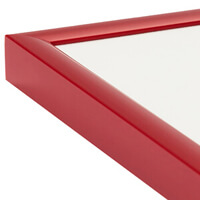 A black and white subject in a white picture frame, on the other hand, will appear as a harmonised unit in a nice ensemble. You could even be more playful by, for example, combining sepia pictures with colourful red photo frames.

What type of frame

When you've decided which colour you want for your picture frame, it's time to decide what style the frame itself will have. Should it be thin or wide, simple or decorated? Even in this case, it can be wise to go off the image's subject, and which effect you want the picture frame to have on it.

You are either trying to create a unified style between the subject and the picture frame, or you play with the contrasts. A very embellished picture frame can be a powerful complement to a simple subject and vice versa.

Most of the picture frames we have in the sizes of up to 24x30 cm have stands so that they can, for example, be placed on a table. Whether the picture frame has this feature is always stated on the respective product page. Nearly all picture frames have wall mounts, so it's simple to hang them on a wall. 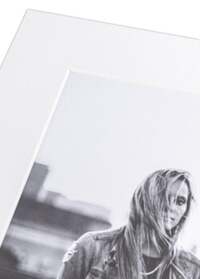 Nice! Now that you've gone through almost the whole guide, we hope that you're starting to figure out what kind of picture frame you want. Now there is just a last little thing to decide, but it's may also be the most important – or it will, in any case, have the biggest impact on the final appearance of your picture.

We're talking about mounts, which are something we recommend for almost all pictures.

A mount gives your picture an extra framing and a lift which will accentuate it in a very pleasing way.

Remember to think about the mount's measurements when you are choosing a picture frame, because it will be added to the image's measurements. You need, in other words, to increase the size of the picture frame if you want to use a mount – or otherwise allow the mount to cover the edges of the image. This is, of course, determined by what image you have – if it shows, for example, a large starry sky, it is maybe not such a problem if a few centimetres of each edge are hidden.

A good rule of thumb is that the inner measurement of the mount should be 1 cm less than the picture. Otherwise, there is a risk that the picture falls out and does not sit snugly behind the mount. So if your picture is 20x30 cm, you should choose a mount with inner measurements of 19x29 cm.

We hope that you'll find these tips helpful. Don't hesitate to get in touch with us if you have any further questions and thoughts.